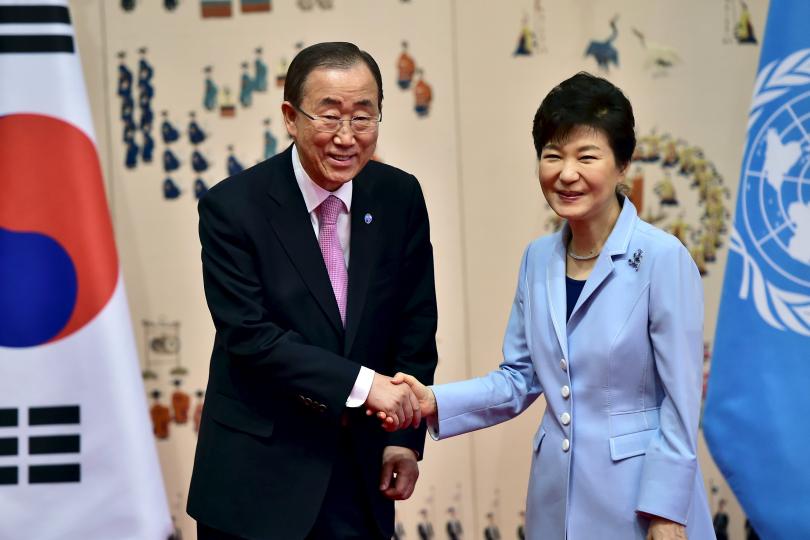 The future of Korean unity must, in order to be understood more fully, be considered in light of the circumstances which first brought about its division. When Korea was first divided along the 38th parallel, the Japanese forces had surrendered their occupied Korean territory to the Allied powers. The United States and the USSR in turn decided to partition the land between them, South and North, respectively. The plan originally was to occupy the territory until an independent and unified Korean government could be established in the peninsula. The Cold War which heightened tensions between the two occupying forces prevented those plans from coming to fruition, and the Korean War which followed from 1950-1953 cemented the division of Northern and Southern Korea in an armistice which remains in place to this day.[1]

While at first the two Koreas were kept apart as a reflection of the geopolitical interests of the two great superpowers, today the outside power structures affecting the international politics in the region are quite different. China’s vested interest in North Korea, and the United States’ continued denouncement of North Korea’s regime have ensured that while other countries were freed of their Soviet/US power struggles, the Korean peninsula did not experience an end to hostility of foreign actors.  That being said, one must also acknowledge, as Michael Robinson points out in his book on Korean history and evolution that “South Korea is no longer just a piece in the strategic puzzle of Northeast Asian security, nor an increasingly troublesome importer into the US economy… it now has multidimensional relationships, economic, political, and cultural, with the region and the world has altered decisively its relationship with the United States, its old security partner and economic guarantor.”[2]

South Korea’s evolution away from its protective foreign power may suggest that this “peripheral power,” as defined by B.K. Gills, has now evolved into its own independent and hegemonic state. What would this evolution reveal about the state of Korean unity? Is reunification still possible if  both states have achieved their own independent power and sovereignty?

Gill writes that “above all, the possession and deployment of sovereignty is absolutely indispensable to the success of a nationalistic strategy and thus to ascendance in the international system.”[3] Who between the two Koreas has the claim to sovereignty, and to rightful representation of the Korean people? Which of the two Koreas has a claim to legitimacy? To answer this question, a historic perspective will be used.

After colonization by the Allied powers, self-determination of Koreas was essential to governing. Both occupying forces (with opposing ideological xxx) claimed to be the sole legitimate representatives of the Korean people[4] – as both claims were mutually exclusive, only one could be true. The legitimacy issue immediately became what Gill calls “a key axis of occupation politics,” and I would argue that it has remained a key axis of politics for Kim Jung Un as well, as he continues to promote himself as the leader of One Korea. (This can be seen well in Northern propaganda, such as the poster below.)

In order to discuss the concept of legitimacy well, one must look at the criteria which a legitimate government fulfills. According to Max Weber, legitimacy was only descriptive, not normative. In other words, the distinction is made between three sources of legitimacy, which the Stanford Encyclopedia of Philosophy defines as follows: “People may have faith in a particular political or social order because it has been there for a long time (tradition), because they have faith in the rulers (charisma), or because they trust its legality—specifically the rationality of the rule of law.”[5] By these definitions, during the Allied occupation in the wake of World War II and the capitulation of the Japanese and their occupied territories in the Korean peninsula, the legitimacy would have fallen to the North. In the late 1940s, two contending claims for national representation emerged in Korea: the Korean People’s Republic (KPR) and the Korean Provisional Government (KPG).[6] The KPR had the strongest claim to legitimacy, but was undermined by both the USSR and the United States.[7] Because it had leftist and communist tendencies, the KPR enjoyed cooperation in the North, and was subject to suppression in the South.[8] At the very beginning, then, and during its first division along the 38th parallel, political forces which were only allowed to grow in the North had a claim to legitimacy. If considered under this light, it would be correct to say that the only legitimate government in the Korean Peninsula is the DPRK. If, however, one were to accept the parameters of legitimacy as set forth by Max Weber, then the rule of law must also be taken into consideration. Does Kim Jung Un hold legitimacy in light of rule of law? Is his exercise of power just, and supported by the peoples? I believe that it is safe to say that if the DPRK was at one time the legitimate representative of the Korean people, it is so no more. The authoritarian nature of the regime which puts its citizens in prison camps loses all legitimacy by virtue of its disregard for the humanitarian disaster within its borders which it not only does nothing to alleviate, but rather exasperates further. In contrast, South Korea has made significant progress on the democratization front, and as stated by Asia Society “while South Korea has often been less democratic than Americans would like or the Korean leaders claimed it to be, since the fall of its military dictatorship in the late 1980s democracy appears to have become increasingly consolidated,” pointing to the Southern end of the peninsula when searching for legitimacy.[9]

South Korea also seems to enjoy more legitimacy than its northern counterpart in the international realm. Due to its immense economic success, South Korea is seen as one of the world’s developed industrial countries, enjoying substantial influence in its geographical region, as it is the third-largest economy in Eastern Asia, after Japan and China.[10]

In regards to their economic performance and geopolitical importance in the region, Korean youth has have expressed a fierce nationalist commitment to Korean independence in economic and international affairs. Robinson writes that “when this generation takes leadership, they will do so as more self-confident global citizens unfettered by entrenched enmities or automatic gratitude for US security guarantees. But they will also have to solve the anachronism of Korea’s division in order to guarantee the safety and stability of their future.” [11] As is well known, economic prosperity and safety go hand in hand, which makes me question Robinson’s statement on South Korea’s eagerness to consider itself “unfettered” by US security guarantees. The IBM tests conducted by North Korea this year have proven that the South still is very much in need of American assistance in the region. The United States is also to blame, however, for the escalation in the region. (I can’t help but wonder at this point whether world superpowers intentionally behave in a manner which will keep them relevant to the international community, e.g. escalating situations in the Korean peninsula to remain important to South Korea’s security.) When Bush steered US policy in a different course, away from limited engagement with the DPRK which Clinton had promoted, and instead used hostile rhetoric  whilst talking about the DPRK (as being part of the “axis of evil”) , North Korea retaliated by “candidly announcing to startled US envoys that they were actively processing uranium into weapons-grade material.”[12] International law was further broken when the North “abruptly expelled International Atomic Energy Agency (IAEA) inspectors and withdrew from the Nuclear Non-Proliferation Treaty, becoming the only nation ever to do so. Shortly thereafter, the United States charged the DPRK with breaking the Agreed Framework and terminated the pact; this ended fuel shipments to the North and halted construction (barely begun by 2002) on the light-water reactors,”[13] further estranging the North from the international community.

The missile and nuclear tests conducted this year by the DPRK have completed the North’s requirements and now enable it to reach American mainland with a nuclear weapon (presumably). This of course destabilizes strategic relationships throughout East Asia and the world more globally, causing the United Nations Security Council to hold yet another meeting in an attempt to solve the regional crisis before it results in an unfathomably destructive war. Of course, North Korea sees their possession of a nuclear weapon as a deterrent measure, one which will protect them from the United States. Robinson argues that “while the North Koreans may be considered paranoid by some, they are convinced that these programs are necessary for survival of their regime.”[14] While this may be true, they also cause irreparable damage to the relationship with South Korea and the international community, making the prospect of unity dim. In addition, this intent on doing anything necessary to guarantee the regime’s survival cause North and South Korea to remain “locked within their system of division, and this division holds the entire region hostage, preventing significant restructuring in any new world order.”[15]

An additional requirement for unification in respect to the international community and international law is the necessity for the more than fifty year truce that originally halted the Korean War in 1953 to be transformed into a peace treaty. Robinson remarks that “the division of Korea is now the last remnant of the Cold War and lingers as a reminder of superpower nuclear confrontation and a bipolar struggle between Communism and Capitalism.” [16] It is time that Korea moves on, too, and that the two superpowers holding North and South in their sway – the United States and China – allow them to do so. How this issue of Korean reunification will be solved will have a major effect on the power arrangements in the region, and will reveal which country will continue to lead the international community. Will the United States continue in its position as leader in the international community, or has the Trump administration signaled the decline of the US as leader in the UN? Robinson correctly notes that in past conflicts “it is significant that China has stepped to the front and proposes to lead the world away from the most recent crisis.”[17] Will China do so again? Whoever takes the lead in effectively solving the problem which now lays before us globally will gain significant power at the United Nations.

Both how the nuclear crisis will be averted and the how reunification may be accomplished remains an international conundrum. To me, the two issues seem to go hand in hand. Since a reunified Korean state will have strong reasons to dismantle its existing nuclear capabilities, the interest in creating a solution which will also diminish the likelihood of future nuclear crisis should increase the interest in a one Korea solution as well. Both the United States and China share strong interests in non-proliferation in general and especially in East Asia – if the foreign actors in the region can agree on the future course of the Korean peninsula, Korean unity will still be an option.

This work is licensed under a Creative Commons Attribution-NonCommercial-NoDerivatives 4.0 International License.